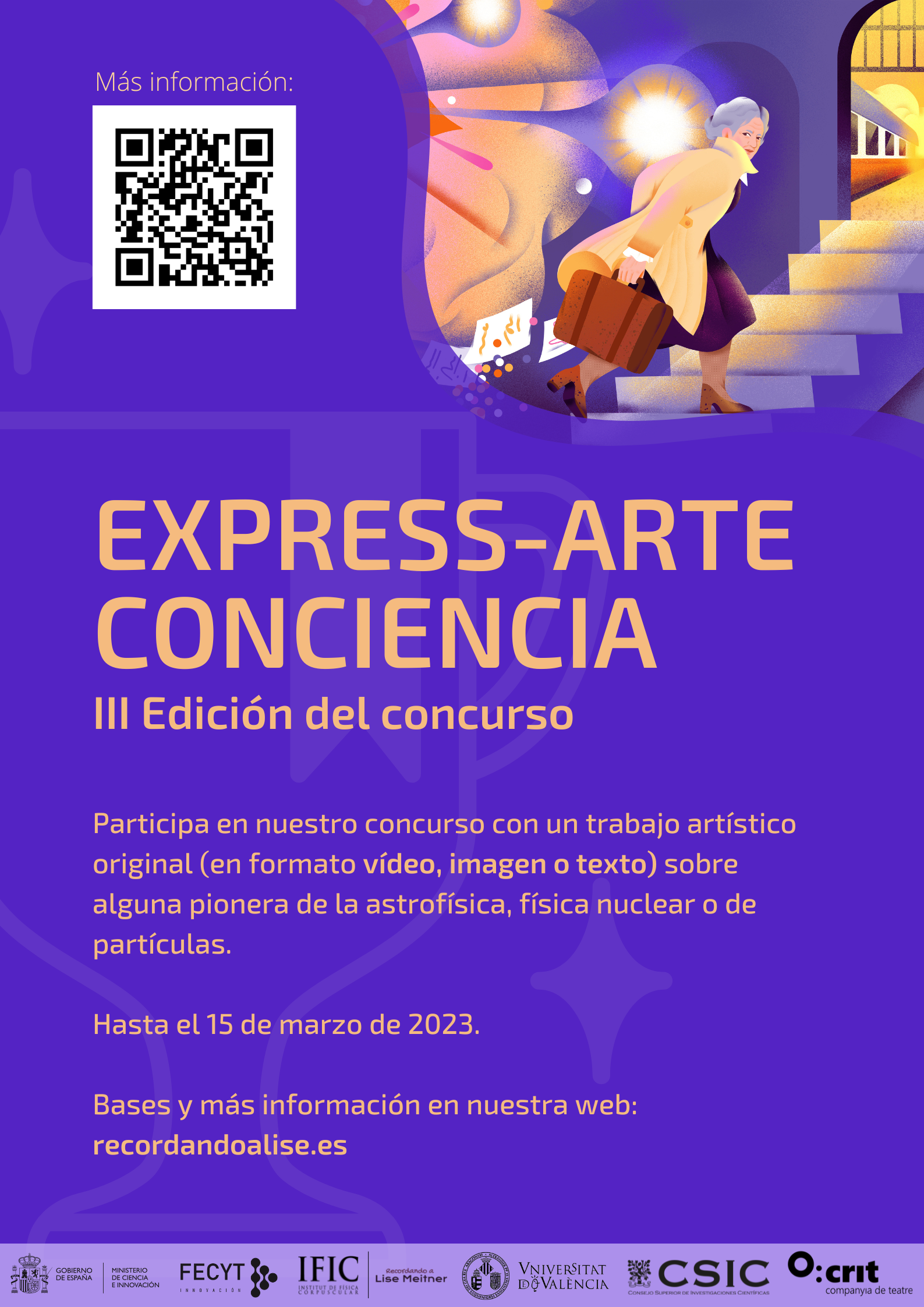 The project starts again with the opening of the call for sending works to EXPRESS-ARTE CONCIENCIA, a contest that mixes science and art aimed to students of secondary education and formative cycles.

EXPRESS-ARTE CONCIENCIA is a multidisciplinary contest organised by the Institute of Corpuscular Physics, a mixed centre of the CSIC and the University of Valencia, through Project Meitner, with the collaboration of the Spanish Foundation for Science and Technology (FECYT) – Ministry of Science and Innovation, in which science, arts and humanities are combined. The initiative is aimed to secondary school and formative cycles students. The period for participating ends on 15 March 2023.

The competition has already had two editions in the past, in which around 200 works have been submitted by students from all over Spain. To participate in this year’s edition, contestants must create an original artistic work, in video, image or text format, about a pioneer in the field of astrophysics, nuclear physics or particle physics. Participation can be in groups or individually, but always under the supervision of a teacher from their school.

There will be three €500 prizes, one per category (text, image and video). On the Project Meitner website the contest conditions and additional information can be found, as well as the registration documents that contestants must fill out in order to participate.

Project Meitner, an initiative to give a voice to those who have been silenced

“Project Meitner. Remembering Lise Meitner” is a project promoted by the Instituto de Física Corpuscular (IFIC), CSIC – University of Valencia. Thanks to this project, the IFIC will retrieve and reassess the contribution of great women, pioneers of Nuclear and Particle Physics, through the character of Lise Meitner. The theatre play that tells the story of her great discovery, nuclear fission, and which was first performed during the first edition of the project, will be performed again. This time it will be at the Teatro L’Agrícola in Alboraya (Valencia). There will be two morning sessions on 1 and 2 March for schools and two afternoon sessions on 2 and 3 March for the general public. In addition, the session on the 2nd will also be adapted for blind audiences.

With all this, this initiative promotes social equality, encourages scientific vocations and highlights the barriers that women scientists have faced throughout history. Over the next few months, all the activities included in the framework of this project will be carried out, such as the Science and Gender days, the MagnIFICa mentoring programme, the workshops and, at the end of the contest, the exhibition of the selected creations.

Today has also been held the presentation of the #MagnIFICa mentoring programme aimed to female physics students at the University of Valencia, an activity that has been very well received by the students in which they will learn about the day-to-day work of IFIC women researchers. The programme will serve to generate new links between women experts and young researchers in physics.

IFIC and Project Meitner will be providing more detailed information about the activities for the general public and they will also be available on the website of Project Meitner and its social networks.